Could it be a Yamashita Treasure Found in Lanao, Dalaguete?
by: Cyril Magallanes

A digging inside a cave at Barangay Lanao, Dalaguete had been discovered by authorities yesterday, March 22, 2012

The digging was believed to be done by treasure hunters searching for one of the infamous Yamashita treasures which are alleged to be buried in caves, tunnels, and underground complexes in hundreds of sites over the country.

Unverified reports of sighting of armed men in the site these past weeks for almost a month prompted concerned residents to report to a municipal councilor who is residing in the same barangay who also reported the said treasure hunting to Mayor Cesante.

When the team visited the site yesterday, the alleged treasure hunters were no longer in the place.  They had confirmed the digging and documented the area which was found to have traces of treasure hunting activity.

The Honorable Pablo P. Garcia, Congressman, Second District of the Province of Cebu handed to Mr. Ramon Cortes, Principal Of Mantalongon NHS, a document which grants P100 000(One Hundred Thousand pesos) to our Alma Matter, Mantalongon National High school, previously in the month of August. The said amount is intended for the lot acquisition nearby the school.

The lot shall be the area where a 2-storey with 4-classrooms building would arise to be the home of MNHS students. The said project is made to answer the room crisis of the school due to an increase of the rate of population every school year.

This project would aloft Mantalongon National High School into a higher pace- a public school that would give more quality basic education and produce globally competitive citizens in the future. 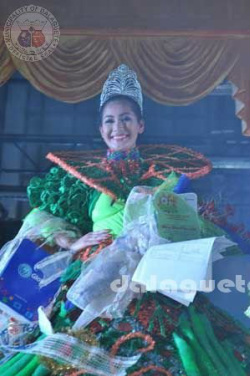 A new set of Dalaguetenon beauties rocked up the stage during the “Search for Utanon Festival Queen” last February 10, 2012 to highlight the 301’st town fiesta of the municipality of Dalaguete. The said celebration of music and dance was rendered for Sr. San Guillermo de Aquitania as thanksgiving for the bountiful harvest of Dalaguete’s valued vegetable crops that contribute to the dynamism of lead economy.

Mantalongon’s pulchritude, Lorraine Mitzi Ambrad, a third year student of Mantalongon National High School, was proclaimed “Ms. Utanon Festival Queen 2012”. The 15-year-old student bested 9(nine) candidates representing different barangays of the said town. She, together with her team, captured the people’s attention and hearts, which made them won the first place in street dancing competition on the town’s major streets. Furthermore, she got three minor awards namely: Best in Group Production, Best in Solo Performance and Ms. Photogenic from more than 2000 online votes! And of course, the Utanon Festival queen crown.

Family, friends and most of all Mantalongon NHS were very proud of her. It proves that Mantalongon is not only rich in “Utanon” but as well as of grandeur talent and reigning beauty.

Rivers of waste, towers of garbage, massive pollutions, flood, illegal loggings and forest denudations are just some of the concrete evidence that man is living irresponsibly. Negligence of what you do today may have a greater effect for tomorrow. These actions must be put into an end or we shall always face the music of the devastating phenomenas made even stronger by these environmental changes.

Last September 28, 2011 was no ordinary day for us Filipinos, for it was the day typhoon Pedring hit the country. He fiercely expressed his wrath particularly in Manila like bombs away hitting without prior warning. If you have seen the television reports, can’t you see? It’s a mess! If only the canals were not filled by garbage,  if only the forest was not deforested, if only we threw our waste in the proper areas. The fact is we can’t keep on saying “IF”! It needs action!

For a change let us take action against these gigantic problems. Lets us Throw our garbage properly, conserve our natural resources and avoid doing things that will result5 into a big mess. Though words are never enough but it can be an instrument for change. Together, through unity and living responsibly, let us bring back the paradise we had before.